skip to main | skip to sidebar

Potential Islands / Park Expansion on the City of Peoria Shoreline

Hullinger briefed Corps staff on the City plans for the Green Edge Plan and The River Trail Drive Plan. The City Planning Commission, Heart of Peoria Commission, and City Council have all given unanimous approval of these plans. Hullinger provided small scale copies of the plans, and noted that all of the information was on line at http://www.peoriaed.blogspot.com/ under “Green Edge” and River Trail Drive”.

The City of Peoria plans a public “Green Edge” along the river from Water Street to War Memorial Drive. Over time, the existing river edge can be converted to parks, a riverfront drive, and new residential development.

Currently this area is primarily industrial with two marinas and parks. This plan proposes that the entire rivers edge become a linear park with a scenic drive connecting from Water Street north to Grand View Drive, with new homes, additional public park land, and beautification of the area.

The River Trail Drive Plan is part of the Green Edge area and covers the area currently owned by the City, from about 3 blocks north of I-74 north to north of Spring Street. The City is searching for developers now, and has strong interest from quality firms.

The City plans a create quality mixed use development overlooking Riverfront Park, an attractive scenic drive, and quality new park land. This development would help revitalize Downtown, improve the safety and usability of Riverfront Park and provide housing opportunities in a park like atmosphere while minimizing impacts to the park, the surrounding neighborhood, the environment and the ecology of the river.

The new Lakeshore Drive would provide an opportunity to drive overlooking the lake similar to the Grand View Drive. This development would utilize 100 feet of land adjacent to the railroad tracks. The northern 60 feet of land would be used for build quality mixed use development. The southern 40 feet would be used to build a scenic overlook road named River Trail Drive. The road and new housing would extend from the Riverplex parking lot north to Spring Street. There would be three access points: one at Irvine Street, one at Norton Street and one at Spring Street.

To accomplish this development some existing Riverfront Park will be used and some of the park’s amenities will need to be relocated. Soil dredged from the river would be enlisted to create more riverfront parkland.

The City wants quality ecological improvement to the River and shoreline, including the existing River Front Park. At present the River’s Edge provided a very steep and unnatural slope to the River. Much of the river’s edge is concrete spoil. The slope is dangerous, and makes access to the River’s edge dangerous.

An environmentally well designed new river’s edge could significantly enhance the ecosystem, and return the river’s edge to a more natural condition. Wetlands could be added back into the edge, with improved fish and bird habitat.

Part of the plan involves the creation of additional open space to replace the land taken for the new river front road and housing. This city is requesting assistance from the Corps of Engineers in properly designing and constructing the additional land. From the City perspective, the City would prefer that the Corps design, permit, and build the islands.

The City has prepared several concept plans. One includes the islands, while the other would simply expand and widen the shoreline. The City is open to either approach.

Jane Gerdes noted that the City Public Works Department was working on the Combined Sewer Outfall issue. The plan was consistent with that effort, and all alternatives involved the construction of a very large sewer line from Spring Street south to reduce pollution.

Corps staff provided an overview of the regulatory process and the need for a joint application to initiate permit review by the Corps, IDNR Office of Water Resources and IEPA.Marhall Plumbley described the Corps permitting issues. The Corps does not have funds or authority for this project now. Channel maintenance dredging in the vicinity has been sporadic, with last event occurring in 1988. If that situation changed or the Farm Creek Diversion Channel began encroaching upon the navigation channel, the need for maintenance dredging would be reevaluated. However, based on many years of experience with the river and its dredging needs, the Corps does not see a short term (5-20 years) need for placement of material., and no plans in the near future for additional dredging efforts. The islands could be built much faster if the city would fund the design and construction effort.

The Corps will be constructing a 21 acre island in the northeast corner of the lower lake this year. The Corps is planning an additional approximately 75 acre island. Hullinger suggested that the Corps consider build the 7 acre Peoria Island when the 75 acre island is constructed. When the Corps and State of Illinois begin the design of that lower island, this issue could be revisited. However, given funding constraints at the State and Federal level, that could be a very long time.

Hullinger asked the Corps staff to consider supporting the project. He also asked them to consider designing and constructing the new shore line. He noted that the proposed development has strong local political support, and that the City is working with the State and Federal Legislators to gain support for the development.

Posted by C Hullinger at 1:52 AM No comments: 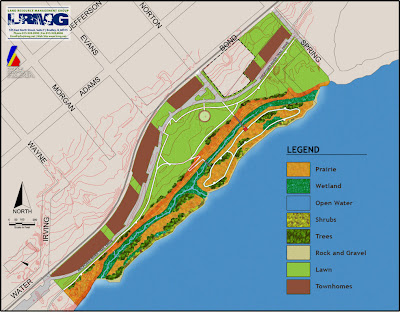 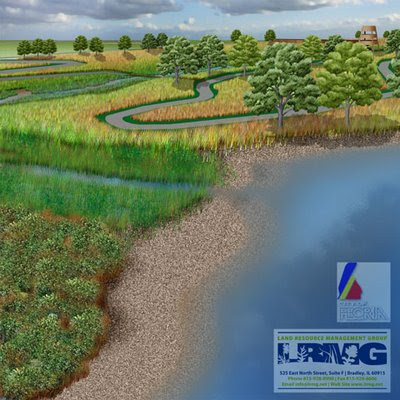 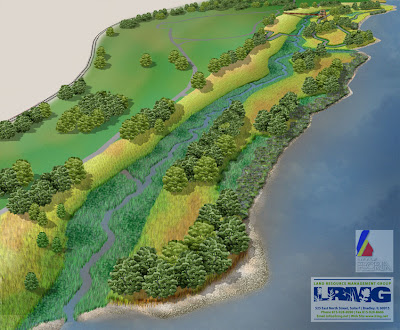 The islands above were conceptually designed by the firm LRMG.
http://www.lrmg.net/

The islands would improve the environmental quality of the Illinois River near downtown Peoria.

Posted by C Hullinger at 2:10 PM No comments:

Looking for a "Green" Developer

The City of Peoria is looking for a Sustainable "Green" Developer to develop our great Riverfront. More info at:


http://Peoriaed.blogspot.com/
Posted by C Hullinger at 12:52 PM No comments:

Boardwalk Renderings presented at the Riverfront Planning Meeting, May 3, 2008. Discuss what Peoria can do to encourage continued improvement in Riverfront Planning.

The citizen’s input will be placed on the City of Peoria blog at peoriaed.blogspot.com and incorporated into Riverfront planning efforts, and considered by the Planning Commission for incorporation into the Comprehensive Plan.

More information at http://peoriaed.blogspot.com/ under

hullingerc@gmail.com
Posted by C Hullinger at 10:27 AM No comments: The City of Peoria could create a public “Green Edge” along the river from Water Street to War Memorial and Grand View Drive. Over time, the existing river edge can be converted to parks, a riverfront drive, and new residential development.

Currently this area is primarily industrial with two marinas and park land. This plan proposes that the entire rivers edge become a linear park with a scenic drive connecting from Water Street north underneath War Memorial to connect to Grand View Drive, with new homes, additional public park land, beautification of the area, and enhancement to the natural ecosystem.

Staff have proposed to the property owners that they donate the flood way between the flood way line and the Illinois River. This land has little value to the owners, since it cannot be built on, and is a liability. By donating the land the owners get a tax write off and good public relations. The Park District would own this land. Land owners are also encouraged to donate an additional 50 feet, which would be the right of way for a new road.

The property owners would keep the adjacent land, which could be developed as mixed use development. The development of this property would pay for the road. This plan will likely take many years to implement, but there is interest among some of the property owners. There is also some opposition.

The implementation of this plan is completely voluntary - if the property owner does not like the plan, they do not have to implement it. That is why it will probably take many years to implement. Subsequent owners may choose to follow this plan.

The City can of course implement the first phase of this plan, since it owns the southern portion of the property between the Riverplex and Spring Street. A more detailed concept plan has been developed for that property.

More info at the link below:

http://groups.google.com/group/green-edge
Posted by C Hullinger at 1:13 PM No comments: The cross section above shows the proposed redevelopment of the Green Edge. The current land use north of Abbington is vacant industrial zoned land along the Illinois River edge all the way north to War Memorial Drive. The proposed plan would convert this vacant industrial property to the Green Edge, publicly owned park land along the River. A new road would be extended west of this Green Edge, with a line of homes on the west side of the road.

Posted by C Hullinger at 1:09 PM No comments: